Mike Stiles, while training to be a jockey, was breaking a large number of colts one cold winter day for a Thoroughbred farm when he was suddenly catapulted from a horse that had lost control on a patch of ice.

His body, flailing through the air, crashed head first onto the hard frigid track, the force sending him sliding helplessly for meters until his limp body finally came to a rest.

He couldn’t move. His mind told him the the fence bordering the track must have collapsed somehow and be pinning him down. He kept telling his rescuer to pull it off until he was told that there was no fence.

That’s when Mike knew something was terribly wrong. He later learned that he had suffered a severe spinal cord injury.

Just an instant before an able-bodied man, Mike was now a quadriplegic one. It can happen to any of us just like that, in a lightening bolt flash of bad luck and circumstance.

For the disabled, the world becomes a new and much more difficult place to navigate in many ways. In addition to the emotional and mental toll such a tragedy takes, tasks that used to be easy, that we all take for granted each and every day, become difficult.

Even just getting into bed, what used to be simple task, becomes more difficult, and even impossible in certain circumstances.

Mike, when he was on the Canadian Paralympic Rifle Team, travelled around the world in the 1990’s and early 2000’s without a problem. But that eventually changed.

Mike explained, “When hotels started putting in pillow-top mattresses, in many cases it became impossible to get on them.”

The seat of a wheel chair sits at approximately twenty-one inches above the floor. Often, those cushy pillowtop hotel beds can reach 28 to 30 inches. That poses a real problem for a wheel chair user who relies solely on arm strength to pull themselves into bed.

Mike continued, “Even when I call ahead, most often I don’t know how accessible (the hotel) will be for me until I arrive.”

For disabled people, planning a vacation becomes challenging and time consuming. Accessibility barriers when travelling can even become dangerous.

Mike explained, “I know many people who have stopped travelling for this reason because some issues can cause a life-long injury.”

There is much to consider before heading out on a road trip or excursion including adequate parking spots and wheel chair ramps to access hotels, stores, and restaurants. Also, barriers like root damage on pathways, or being faced with the lack of a pathway to get somewhere like a playground or dog park can also be an issue. Lawn and loose rocks are not easy to wheel on.

While Mike was able to easily navigate this root damage, he pointed out that it can be a real hazard for others including even the elderly and small children. 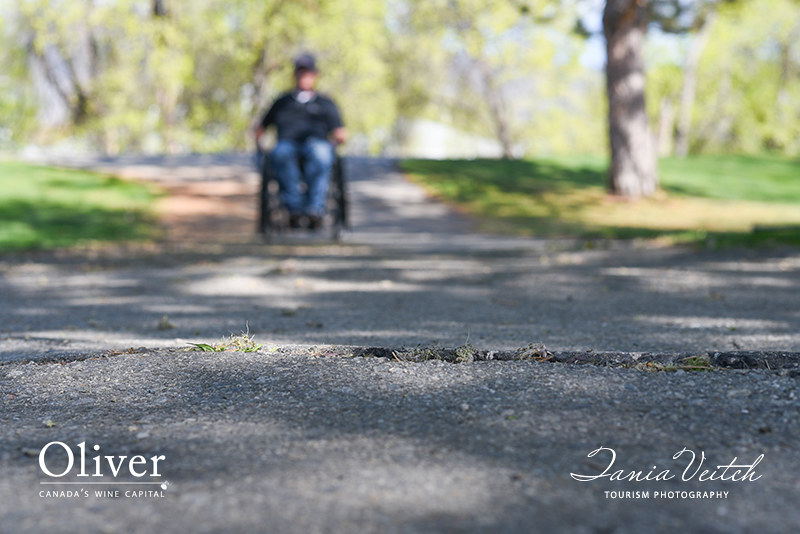 Accessibility is something that needs to be at the forefront of any planning committee’s mind right from the beginning of a new building project and when renovating older buildings.

A larger percentage of people face accessibility issues on a daily basis in the Thompson-Okanagan tourism market than you may think. Mike estimates it to be around 25%.

While we try to do our best to ensure that all facilities are accessible, sometimes we can unintentionally fall short. This is why it’s so important to consult with someone who advocates on behalf of those with disabilities, someone like Mike Stiles. 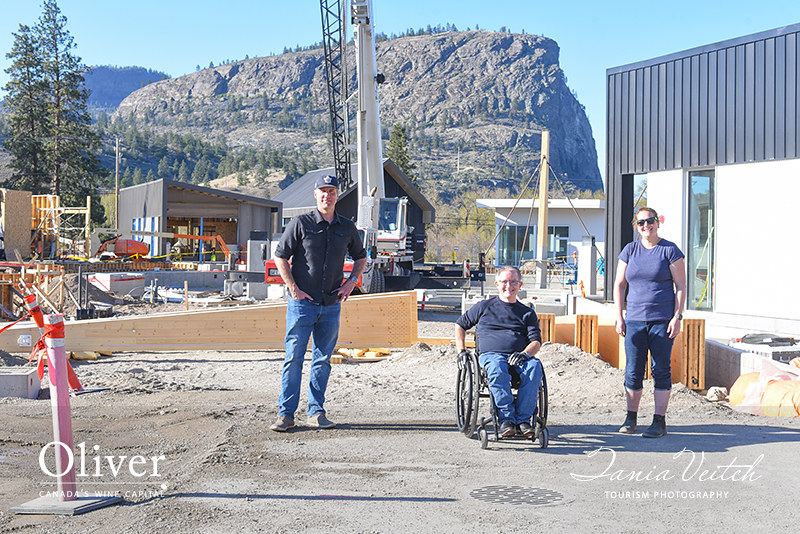 The impact of improving accessibility in Tourism is far reaching. It allows for an inclusive and enjoyable experience for everyone.

From Challenges to Opportunities

For Mike, his challenges became opportunities. Rather than give up, he plowed forward.

After challenging himself in target shooting, he exceeded people’s expectations when he won six matches straight at a turkey shoot.

The same organizers who once only saw his disability now recognized his strengths and finally asked him to stop shooting in order to give others a chance.

Organizing Opportunities for Others

Mike, along with Sam Sullivan of Vancouver, cofounded the Disabled Ultralighters of Vancouver Society (DUVS) but when issues arose around insurance and logistics they instead created the BC Mobility Opportunities Society (BCMOS), which encourages those with disabilities to get out into the wilderness.

Mike and his team designed and built the TrailRider, a cross between a wheel barrow and a rickshaw. It’s widely purchased around the world and has been used on famous treks including the Westcoast Trail, Mt. Kilimanjaro, and the Everest Base Camp. It has also been widely adopted by the Australian Parks system.

BCMOS programs now include the TrailRider as well as adaptive paddle boarding, kayaking, fishing, and even sailing after receiving the same sailboat that Rick Hansen received on his world tour.

Mike and Sam then cofounded the DSA which was renamed the Adaptive Sailing Association of BC (ASABC). They designed and built a boat called Martin 16 which is also widely used around the world.

To add even more, Mike also manages a Fishing Forever event created by the BC Wildlife Federation which provides a day out fishing for folks who have disabilities.

For Mike, being called “an advocate” didn’t always feel comfortable. For years, rather than speaking up, he tried to look beyond the obstacles.

When he began promoting different activities to empower people, he realized he needed to be a voice for the disabled and try and improve things.

“It was the simple everyday obstacles that didn’t have to be there that knocked people back down,” Mike said.

“The biggest challenge is that people don’t really know what barrier-free access is,” he continued. “I didn’t either prior to my disabililty.”

Mike pointed out that these barriers don’t just affect those with physical disabilities, but also parents with strollers, the elderly, and even young children.

To Mike, it’s clear which businesses do understand what barrier-free access is. It is reflected in their buildings.

What Can You Do?

The better we can all understand the issues, the more accessible and inclusive things will get so everyone can enjoy themselves and benefit. 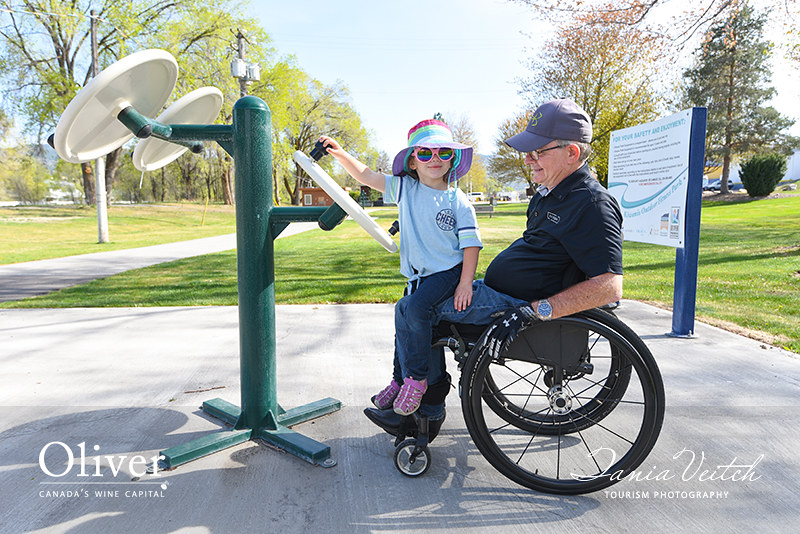 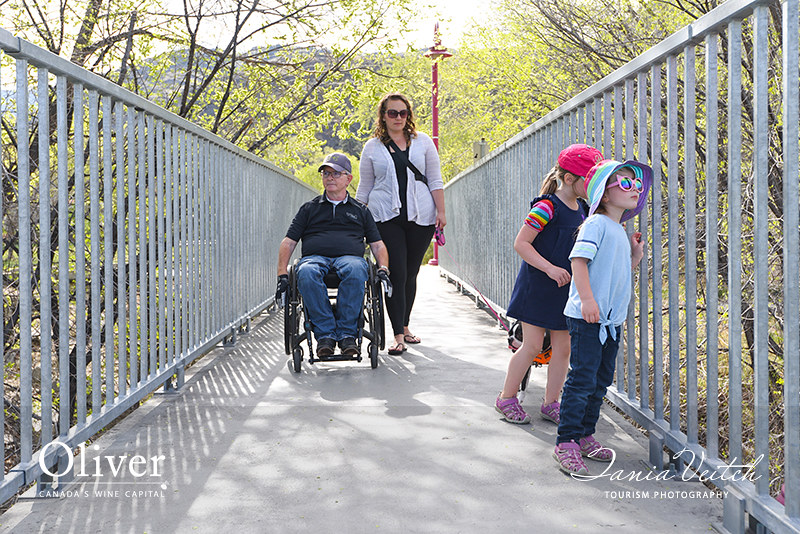 Accessible Activities In The Okanagan For All

The Okanagan has many accessible activities for all to enjoy including the CRIS Adaptive Adventures and the Adaptive Sailing Association in Kelowna, Osoyoos Desert Centre, and beaches with access via Mobi-Mat and Mobi-Chair in Osoyoos. Many wineries in the region also provide a really great accessible experience. 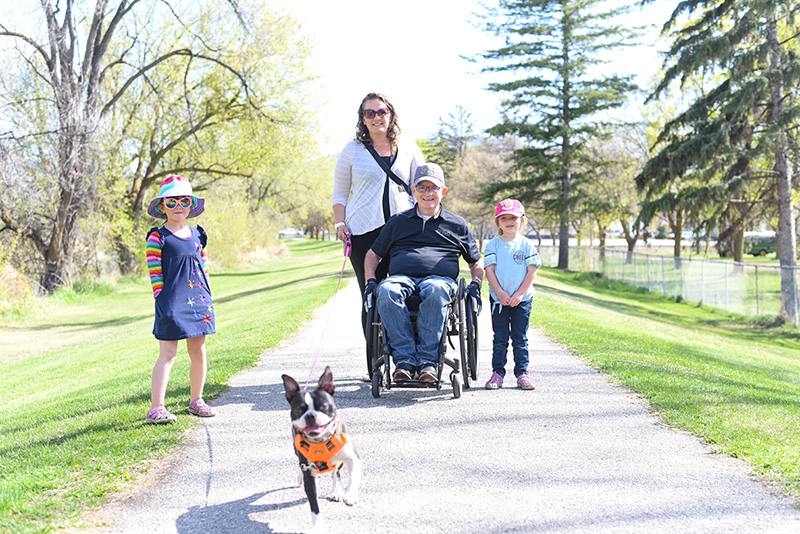 The Importance of Accessibility In Tourism