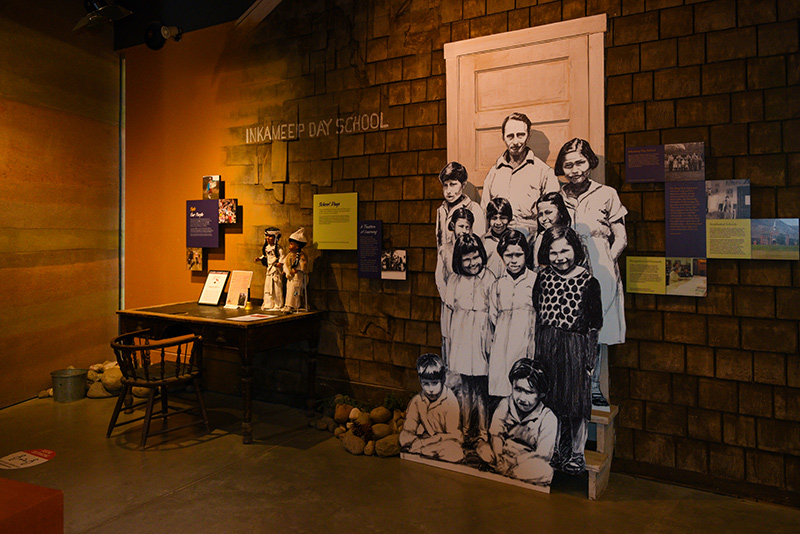 When contemplating the word “nations”, it’s easy to imagine a globe with clearly defined borders between countries, but did you know that within Canada there are many nations?

BC alone includes 35 different indigenous “nations”. For example, the Okanagan Nation is one and the Shuswap Nation is another. What differentiates them is the language.

Derek Bryson, Marketing Director and Retail Manager at Nk’Mip Desert Cultural Centre, explains, “The Shuswap Nation, like Salmon Arm or Kamloops, have similar environments to the Okanagan people, so they may be considered the same to those who did not know the differences between them at a certain point in history.”

Within each nation resides a separate-speaking people with their own culture and customs.

One Nation Within Two Countries

Because of the border, the Okanagan Nation has two different law structures. For this reason, much communication and discussion take place about topics like forestry, hunting, and fishing. 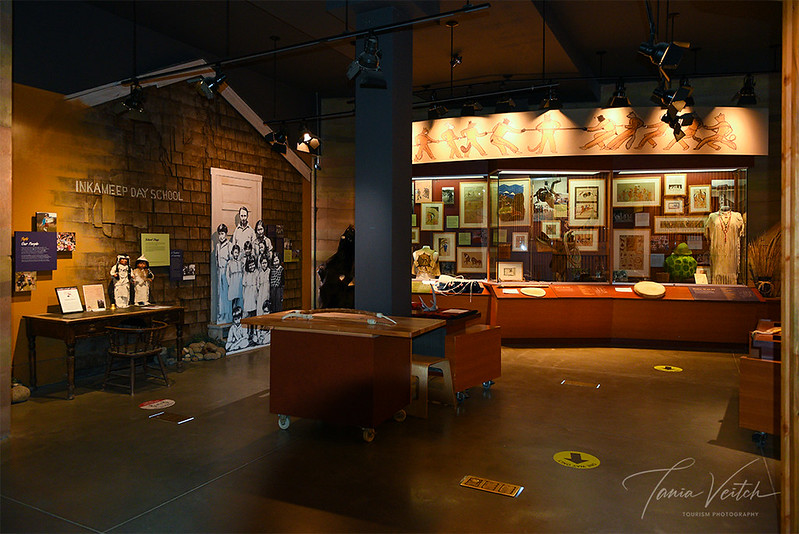 In the 1920s and 30s, approximately four day schools existed across Canada. They were privatized in an effort to keep kids from going to the residential schools, however that only worked for a while.

“Our kids still went to residential schools after Nk’Mip Day School was closed,” Derek explained. “We had the benefit of a positive teacher (Mr. Anthony Walsh) during a tumultuous time . He helped the kids grow, nurtured them through different kinds of artwork, and encouraged them to be who they were regardless of the influence of western society.”

To this day, the Osoyoos Indian Band continues to support and teach its youth about identity, self-esteem, self-expression, and self-awareness. Learn about the Youth Programs below.

The OIB Is A Business People

As a result of the Day School, much hard work was put into the way the Osoyoos Indian Band (OIB) reserve operates.

The positive outcome is the Nk’Mip Desert Cultural Centre, Spirit Ridge Resort, Nk’Mip Resort, the campground, and all the various businesses that the OIB has worked so hard to create.

Quoted by Chief Clarence Louie of the Osoyoos Indian Band, “OIB culture is not just our traditional culture. We are Business People, we have always been business people.” 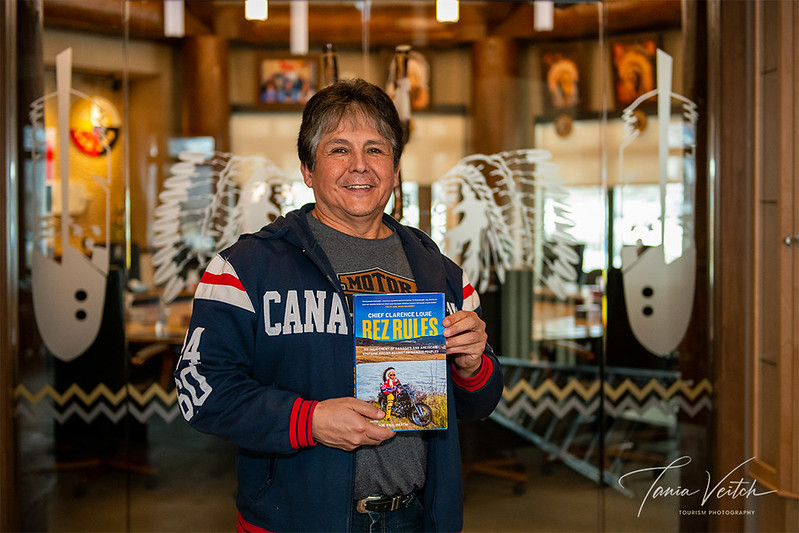 Have you ever wondered where the names Osoyoos, Keremeos, Penticton, and Kelowna come from? Well, they come from the long history of the Syilx People of the Okanagan Nation.

The Nk’Mip Desert Cultural Centre, a non-profit organization dedicated to preserving the past and strengthening the future, is a wonderful place to learn about the people of this land, as well as the ecology and nature of this area.

In winter, the exhibits are self-guided and in summer interpreters give guided trail walks and presentations. 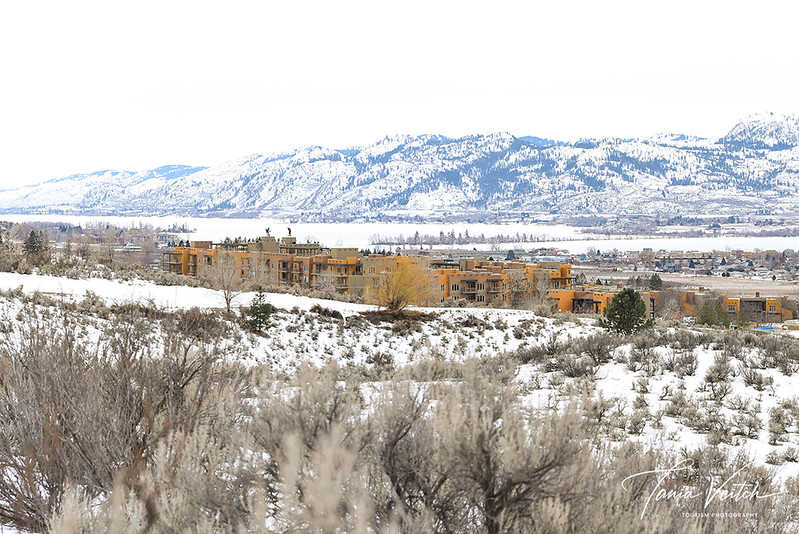 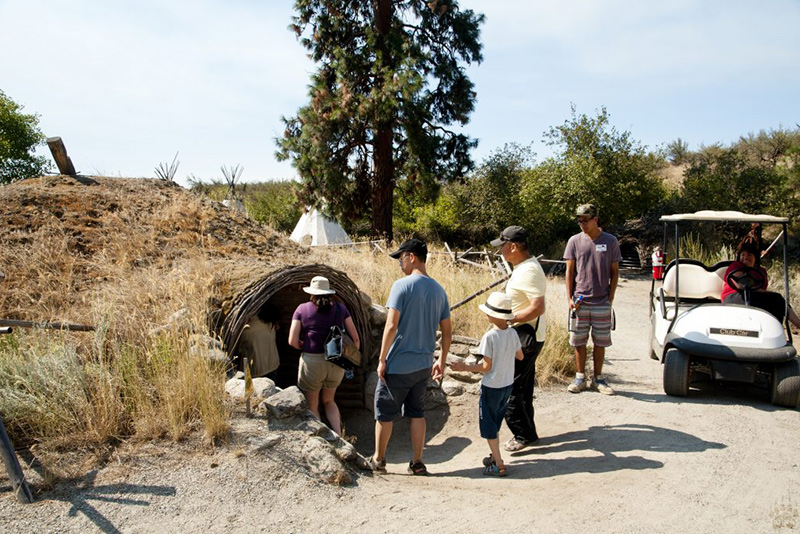 Inside, you will learn about the Nk’Mip Day School and see artwork created by students of all ages who were encouraged by an extraordinary teacher, Mr. Anthony Walsh, to express their identities through the creative arts.

The artwork displayed here was even seen by and shared with Mr. Walt Disney who also invited the children of the Day School, including Derek’s grandmother, to perform plays at his match!

The story Bambi was also partially inspired by the children on the reserve. 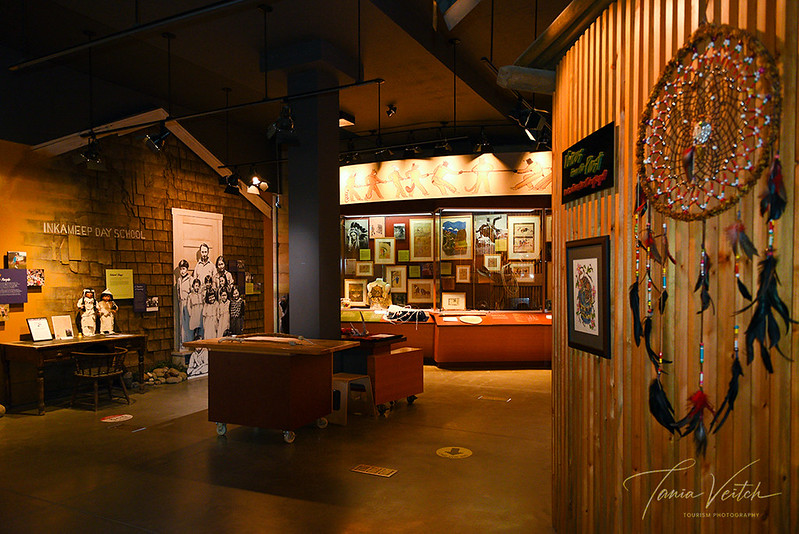 You will also find other artifacts and artistic works. 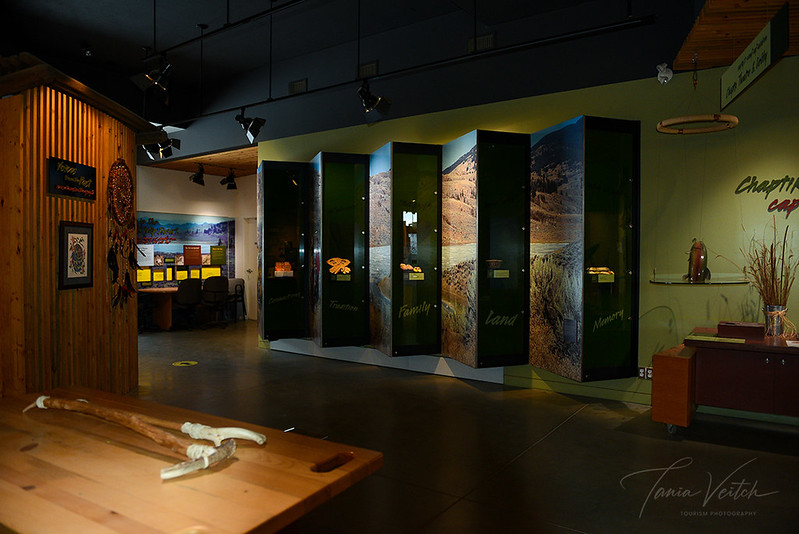 Experience the legends of Sen’klip (the Coyote) inside two multi-sensory theatres. The smaller theatre is even shaped like a tipi where you can sit and experience the story around a simulated campfire! 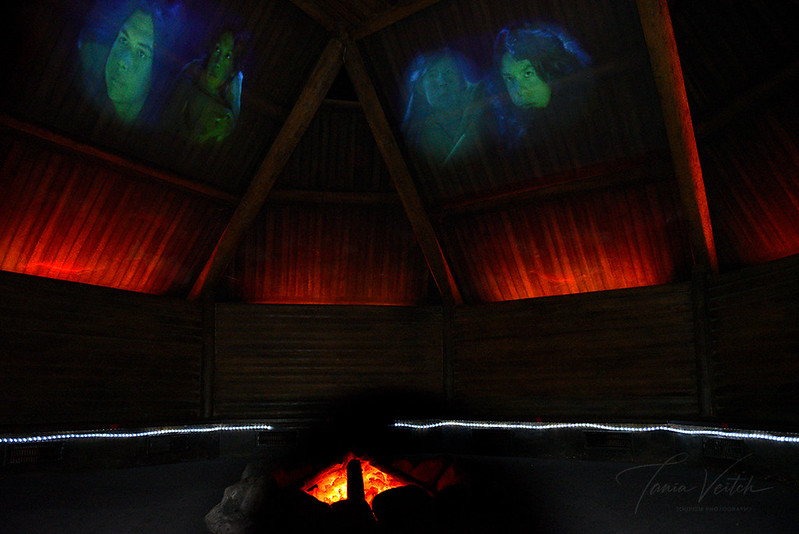 Outside, explore two kilometers of walking trails that meander through rugged antelope and sage brush desert terrain and a ponderosa pine forest. 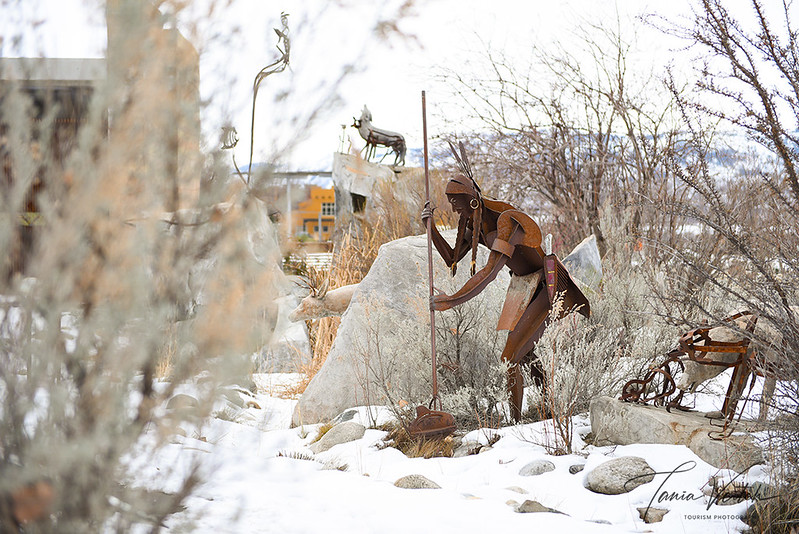 You will experience and learn about the desert ecology and wildlife, including rattlesnakes (below), in the Living Land and Critter Corner displays. Learn more here. 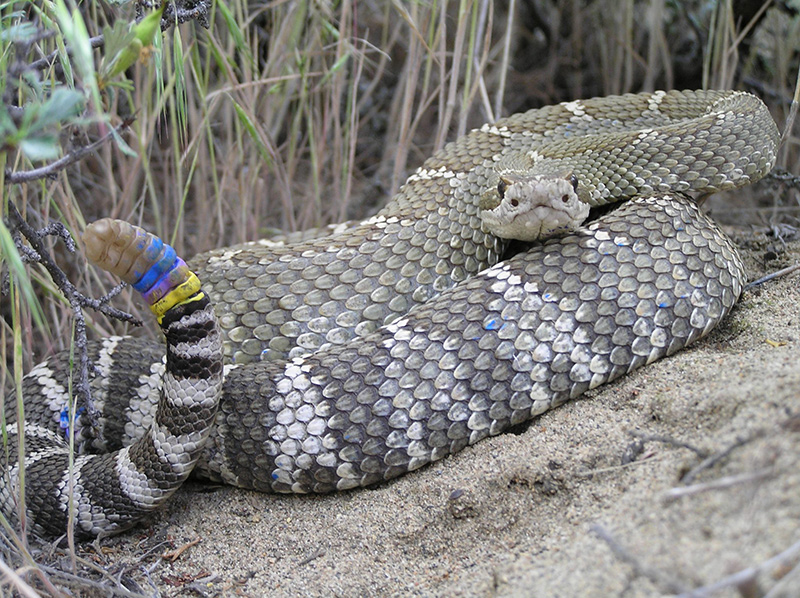 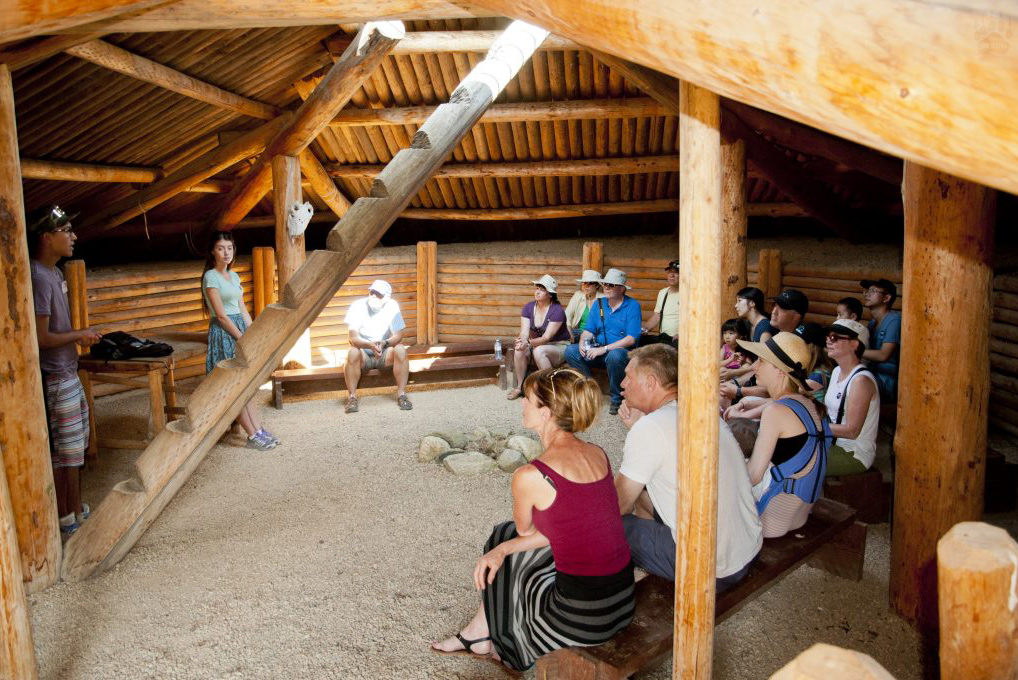 Rappelling in the Desert

If you’re an adrenaline junkie, you can get your fix here too by Rappelling In The Desert from the Chief’s Lookout!

The Nk’Mip Desert Cultural Centre has even won awards for its eco-friendly and environmentally innovative architectural design!

The Osoyoos Indian Band believes in the importance of building a strong healthy community and offers many programs to its community members through the Nk’Mip Resource Centre.

Two programs focus on the young and growing members of the community:

The Power Of Play

In this program, the local elementary school, SenPokChin, and an organization called Right To Play, utilize the power of play to empower and teach children ages 6 – 12 about identity, self-esteem, self-expression, and self-awareness.

Youth ages 13 – 24 learn important life-skills in a fun and active way by pushing their boundaries with fun individual and team activities. 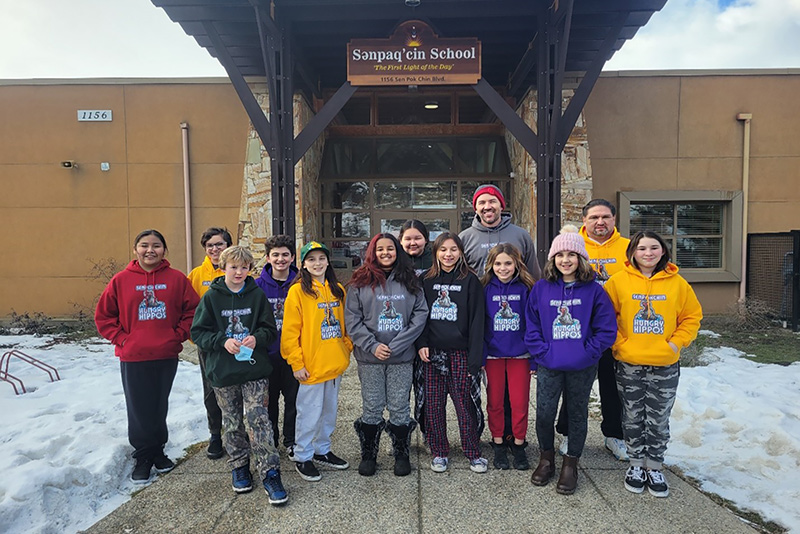 OIB youth can also strengthen their Leadership Skills by being leaders within and outside the local community; either engaging in school Youth Leadership Groups or the OIB Youth Council.

Learn how you can help youth thrive and grow to be our leaders of tomorrow! You can also donate via Oliver Tourism. All donations go directly to the Osoyoos Indian Band for the Youth Program.

To learn more about the other programs offered by the Osoyoos Indian Band, including Pre and Post Natal Care, Parenting, and Elders programs, visit the Nk’Mip Resource Centre.

Enter the second month of our #Oliver12 Instagram Contest which aims to raise awareness about Oliver’s amazing local businesses, non-profit organizations, and charities!

Tania is the Content Marketing Specialist at Oliver Tourism. She is also a tourism and event photographer in the region. Visit her @tvtourismphotography on Intagram!

For The Love Of Good Wine & Owls