One thing that you might not realize about Oliver, Canada’s Wine Capital, is that it’s also got a strong Mexican presence. Much of that is due to the migrant workers who live and work in the vineyards eight months of the year.

It’s no surprise, then, that Oliver is also home to delicious and authentic Mexican cuisine!

Marina at El Sabor de Marina has been operating in Oliver for three years now. People have made the drive from afar just to experience her delicious food. For example, I know someone who does an annual cycling trip from Penticton, destination El Sabor for mouth-watering Tamales, Tacos, Quesadillas, and Burritos.

I experienced this phenomenon myself recently when I stopped to see Marina. A black sedan zoomed into the parking lot like Speedy Gonzales on a mission. He came to a quick stop, his car teeing the nose of mine. With the driver’s side window wide open, a young twenty-something man hung out exclaiming, “What? It’s closed?”

It’s the off-season for El Sabor de Marina food truck right now, but I quickly sent him on his way with two other fantastic options in his pocket, TacoRiendo, and Casa Luna. The young man had come from Penticton specifically for Marina’s food but left happy knowing that he and his girlfriend would still get their tasty fix here in Oliver.

This made me wonder what makes Mexican food here in Oliver so special. It comes down to the restaurateurs who have lived and breathed Mexican cuisine.

Jany Lopez, who owns, manages, serves, and cooks at TacoRiendo, is originally from Mazatlan. She knew that her destiny was going to be somewhere in Canada.

When I asked her how she made that dream come true, she said, “I came to study English. I grabbed the newspaper and I saw an ad (for a job) at a hotel. They were looking for a receptionist with 70% English skills. I had an interview, and I got the job.”

That was just the beginning. She has been here in Canada since 2002 and has not looked back.

In February of this year, she opened the restaurant, TacoRiendo. It also takes over the money-wiring service and grocery products when the Tienda Mexicana shop shuts down for the winter between November and March. 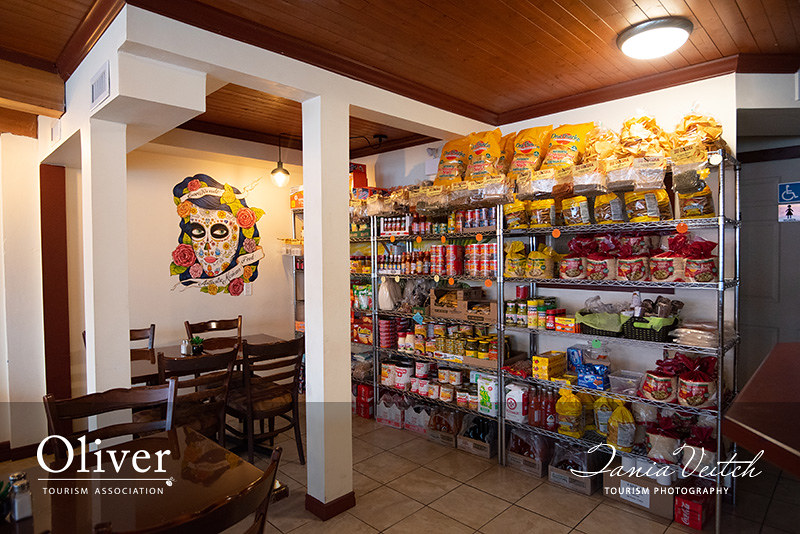 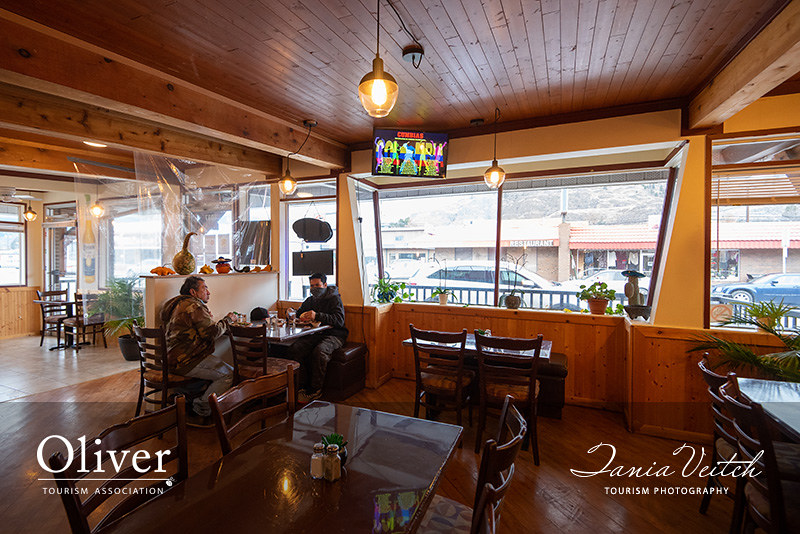 When I asked what inspired her to open a Mexican restaurant here she said, “I saw the need. I’m Mexican and I know how picky we are for the food.”

When Jany asked people in the community what they thought about her opening a Mexican restaurant in town, they were game with the idea.

So far, TacoRiendo has been a big success. Both Canadians and Mexicans come for her food and will sometimes even order two plates at a time. She says when it’s payday for the Mexican workers, she gets especially busy.

Chicken, beef, and pork burritos are among the most popular dishes followed by enchiladas and tacos.

Jany explained, “We knew that we were doing good. If your cuisine is approved by the Mexicans and they come here to eat, it means that it’s good. Mexicans are the best judges. They keep coming back and coming back. After they try it once, they’re here at least once per week.”

It is indeed a good sign and I got to try the food myself. It was delicious! 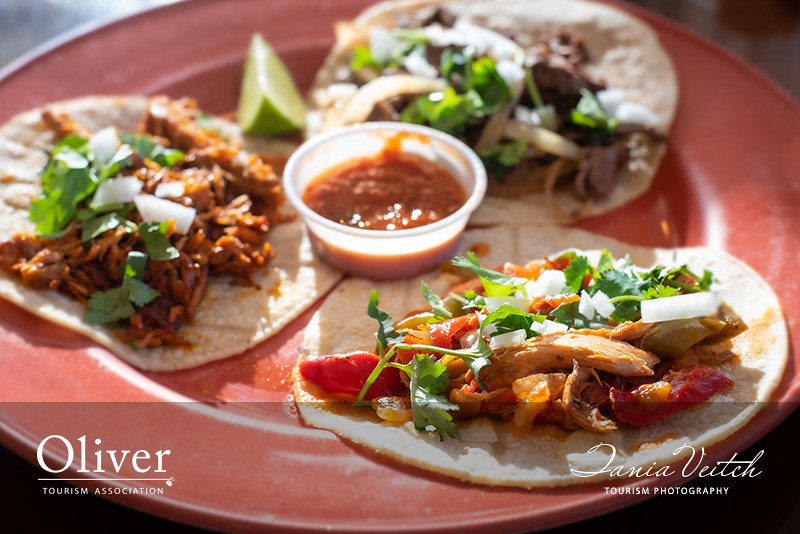 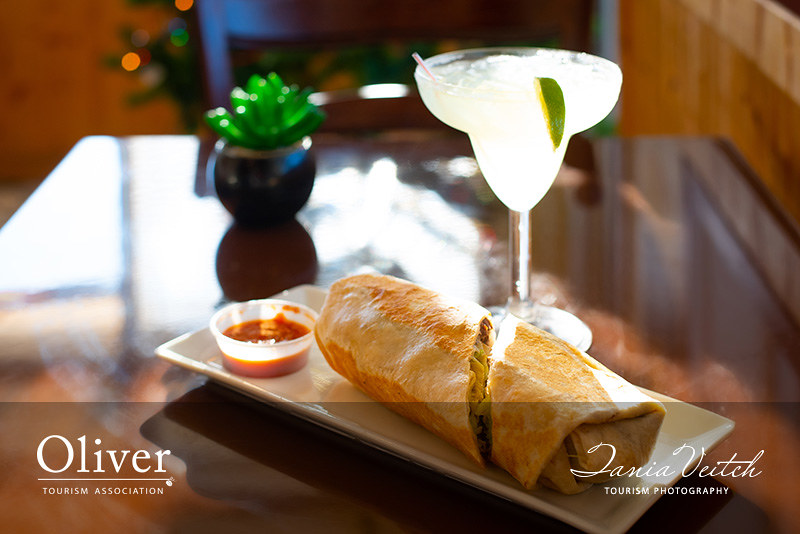 Chicken, beef, and pork burritos are favourites on her menu 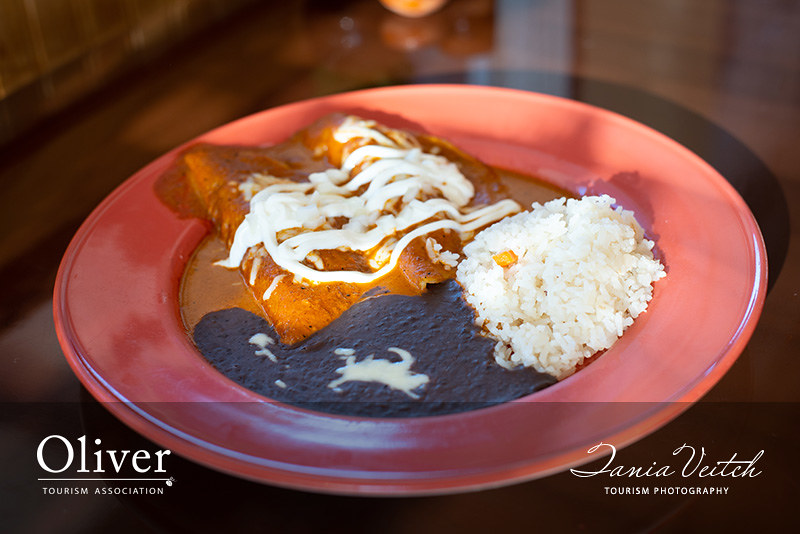 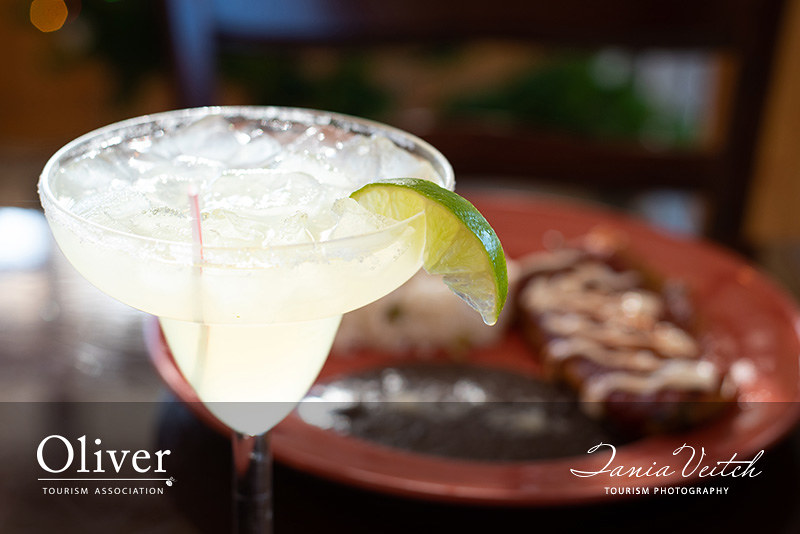 Veronica Rosas Garcés, the manager at Casa Luna which opened in November 2019, is passionate about sharing the culture and history of Mexican food. Originally from Poza Rica, Veracruz, she has been in Canada for two years helping owners, Ana and Rubén De Luna, who came to Canada from Aguascalientes (Central Mexico) for a better life thirteen years ago.

She went over the menu with me in detail as we sat in a large festive dining room decorated with piñatas and flashy banners hanging from the ceiling. Upbeat music infused the room and a large screen TV in one corner displayed Mexican dancers in full costume. 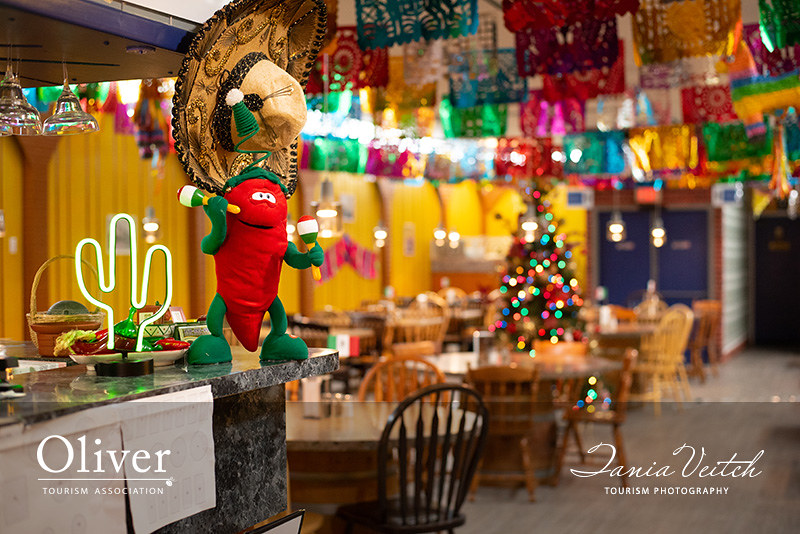 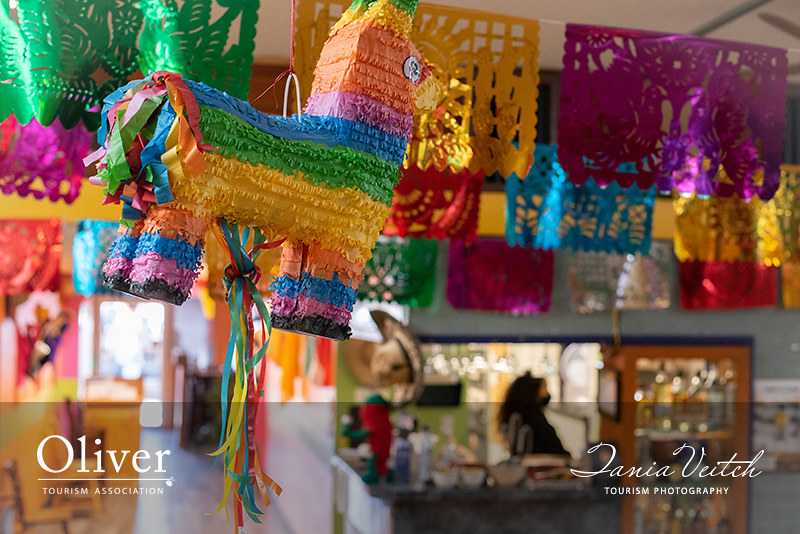 She explained, “We want people to understand that Mexican gastronomy is really big. It depends on the part of Mexico that you are in what food you will be served.”

When I asked Veronica what the Mexican’s really like to eat at Casa Luna, she replied, “The tacos carnitas. They love them!”

She explained that carnitas are quite sought after in Mexico at 4 am after nightclubs close. Street vendors often sell them to hungry after-hour party-goers. Psst…apparently they are a great cure for hangovers!

Veronica’s favourite is the Enfrijoladas. She exclaimed, “I can eat it a lot! Even though it’s just beans, cheese, cream, and a side of Mexican rice, it’s really good. The flavour is really really good. I really really like it.” She also loves the Taco de Chorizo!

Tourists usually go for the Tostadas and I can see why by looks alone! Veronica says it’s the flavour of the chicken made with chipotle and guajillo chilis that they really like. 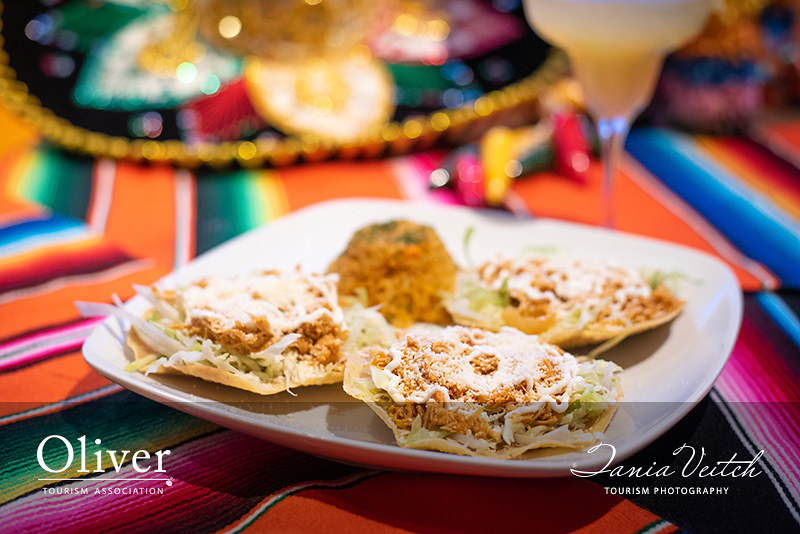 Tostadas are popular amongst tourists.

In summer, Casa Luna gets all of its produce from local farms. They also purchase Mexican ingredients from a special store in Vancouver. To Casa Luna, it’s important to cook with authentic Mexican ingredients, for example, Mexican cheeses including Oaxaca, Asadero, and Cotija.

Veronica explained, “Our job is to show people the really authentic cuisine that you will find in Mexico, not in the touristic places like if you go to a resort in the Baja or Puerto Vallarta. We try to make our food with different textures. We don’t want everything soft because you can’t feel what you’re eating. For example, an enchilada is soft, so we put Cotija cheese on the top to add texture.” 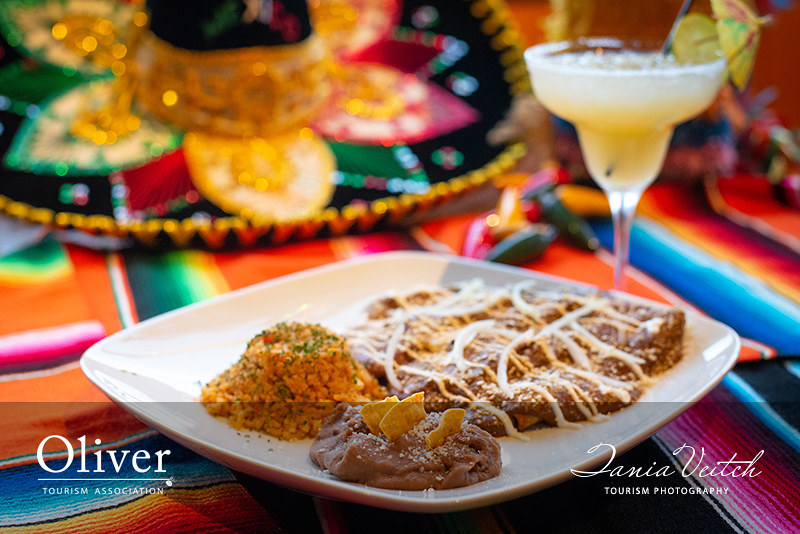 This dish, Enmoladas, was flavourful and delicious! The chips, tortilla, rice, and cheese added texture.

Veronica shared the history behind one authentic Mexican dish made with beans, bacon, and pork that you won’t typically find at resorts. Veronica explained, “It was created when we (Mexicans) were the slaves of the Spanish, we needed to eat something that kept us awakened (energized) all day. So what did we have? Beans were really cheap, and pork was the cheapest meat that you could find. You have vitamins and you have energy to work. That’s why it was created.”

Casa Luna also serves Canadian favourites like nachos because people ask for them a lot.  She described, “The difference is that we don’t put any beans or guacamole on the top.”

And what’s even better than delicious Mexican food? Adding a good Mexican beer or cocktail! Casa Luna serves Mexican beer. They also make delicious drinks with tequila, mezcal, rum, gin, or vodka including the traditional Lime Margarita, the Mangoyada (chamoy sauce with pure mango), and the Paloma (grapefruit with tequila and soda water). 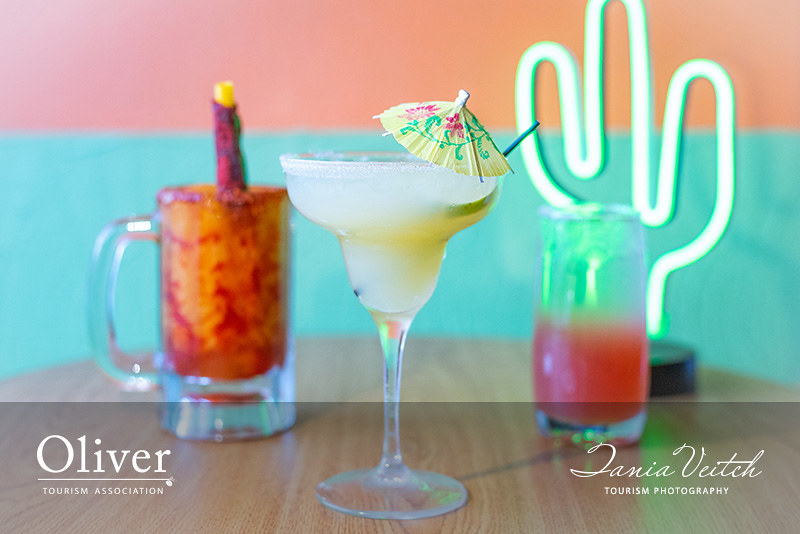 You can also get the Mexican Coca-Cola here which is made with cane sugar as opposed to fructose corn syrup.

I really couldn’t tell her story better than Marina herself who expressed it so beautifully. Marina speaks mostly Spanish so I am sharing her words translated into English.

My story begins in 1996, a year not so pleasant to remember. I was going to Vancouver with my husband and on the way we had an accident that left me disabled. I could not work since I suffered a spinal problem.

By 2000, we were living in Revelstoke. Unfortunately, the winter times were coming, and I was used to a warmer environment. We made the decision to look for a town more suited to the climate I was used to, that is, to the heat.

It was there that we decided to move to Osoyoos, a quiet town and very sunny in summer. We lived there for two years. During that time, I worked for a few months, however, I couldn’t for long due to my disability.

Two years passed and we moved to Oliver. Three years later I separated from my husband. Being alone and disabled, I was looking for ways to get ahead, since I had to cover my own personal expenses.

The field was somewhere I could no longer work because of my disability. I did not expect it, it never crossed my mind, and suddenly a group of agricultural workers suggested that I make them lunch since in the high season, they were short of time to prepare their food.

I made the decision to prepare small portions of tamales, pupusas, and tacos, typical Latin food. Without realizing it from one day to the next, the orders increased. I had so many things on my mind. I was very surprised and at the same time very happy.

Months later, I decided to buy the food truck and rented a small parking spot on Highway 97. I started in the spring when the cold gradually disappeared. Thank God my food was well received by the diners! My food truck became more popular.

The most beautiful thing is that they were not only Latinos but also my Canadian people. I was the first Hispanic to enter the Latino food ranks. And today I thank all the people who continue to visit us year after year.

Some come from Vancouver and others from Calgary and especially people from Osoyoos, Penticton, Kelowna, and my beautiful Oliver. And I extend a cordial invitation to all those who have not taken the time, visit us.

We will be available next spring 2021 so that you can taste the Rico Sabor De Marina!

So there you have it, three different and equally amazing options for delicious authentic Mexican cuisine here in Oliver BC. Each represents food from a different part of Mexico and each gives a wonderfully unique experience.

Be sure to check these wonderful Mexican restaurants out the next time you’re in the South Okanagan! Perhaps you’ll discover for yourself why people come to Oliver from afar for the experience.

And, of course, there are many more reasons to visit Oliver! 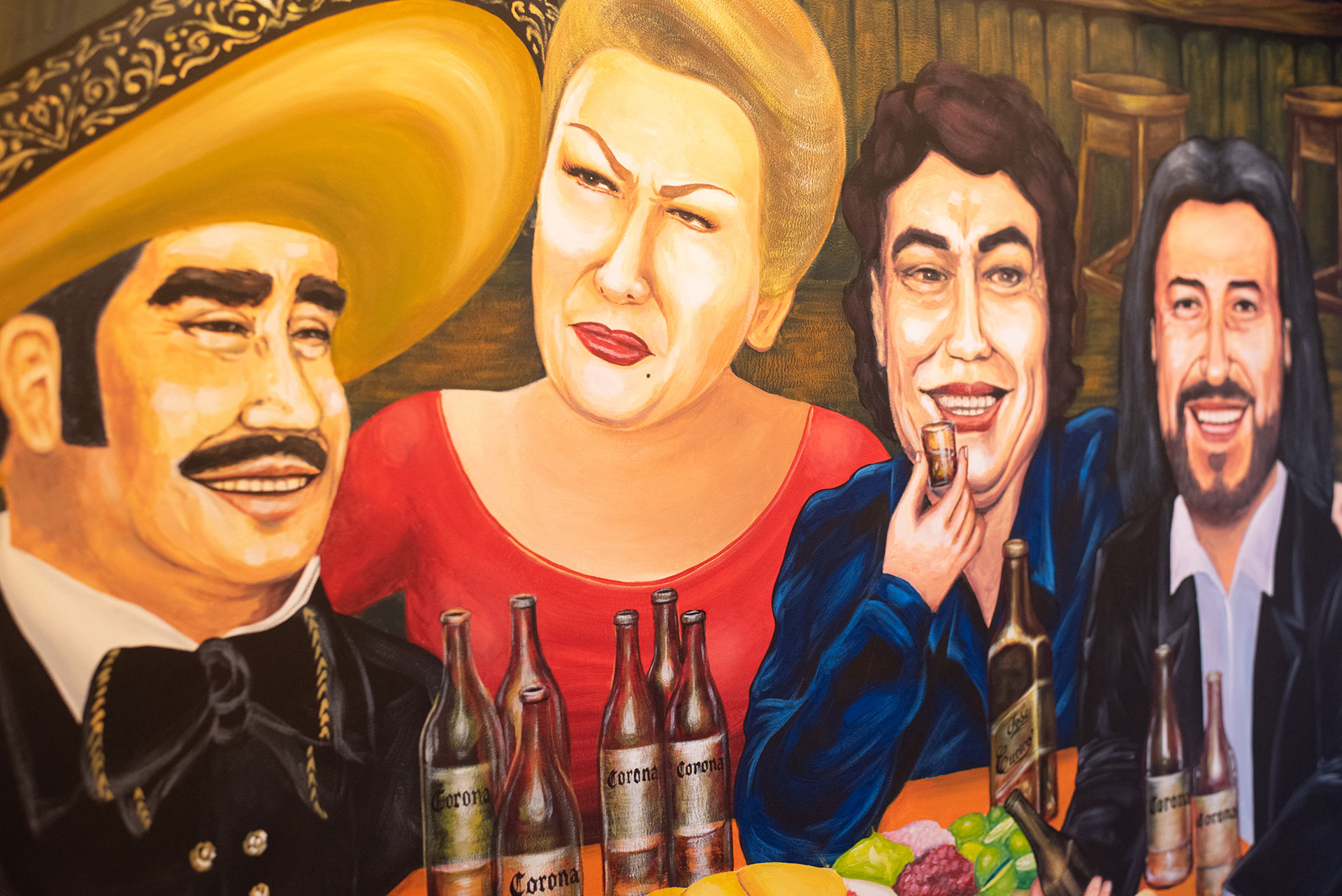