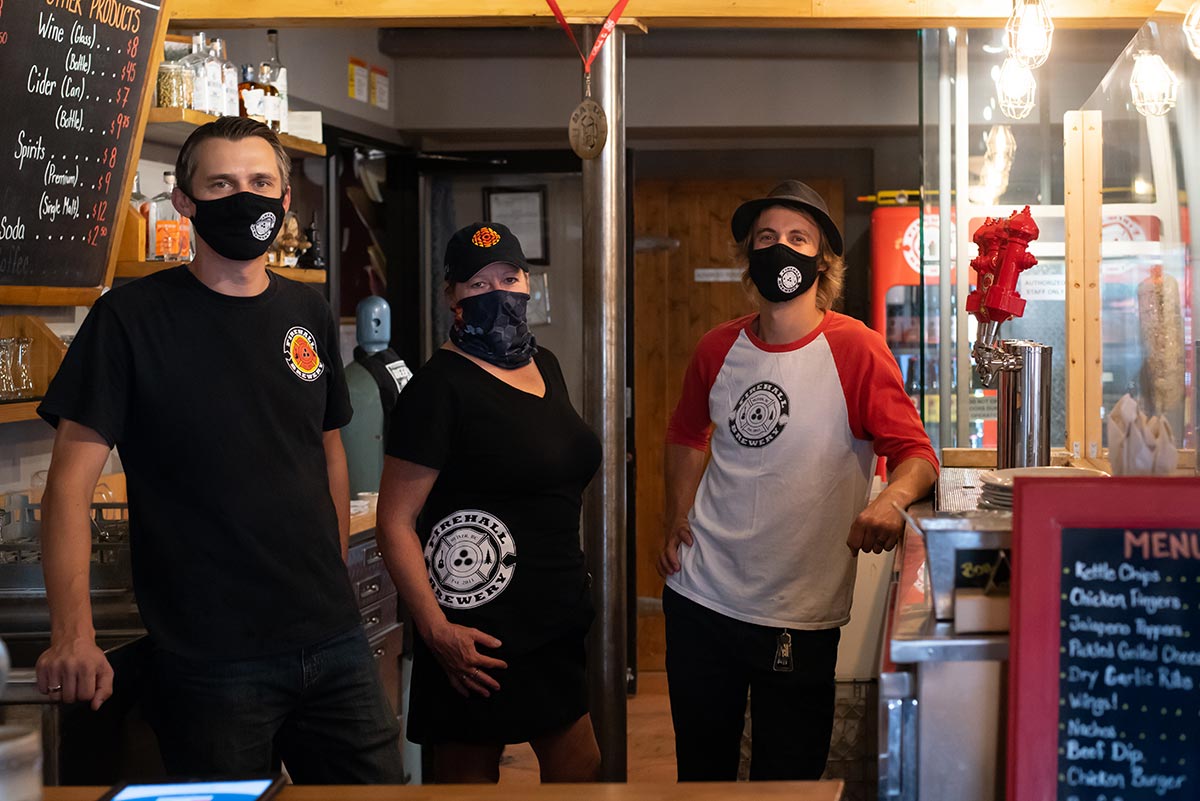 A Tribute To Cask & Keg

It’s been a year of adjustments, to say the least. Events have been canceled and businesses have had to restructure how they do business in order to keep people safe and to stay in business.

Two of Oliver’s big supporting events, Festival of the Grape and Cask & Keg, are two of those events that had to cork up the wine barrel and seal up the cask until the time is right again.

Well, not all is lost.

For those die-hard attendees whose shoulders immediately slumped to the ground, don’t worry. You can still enjoy some Merlot-ale and live entertainment at a low-key tribute to the event at the Firehall Brewery on Saturday, October 3rd. 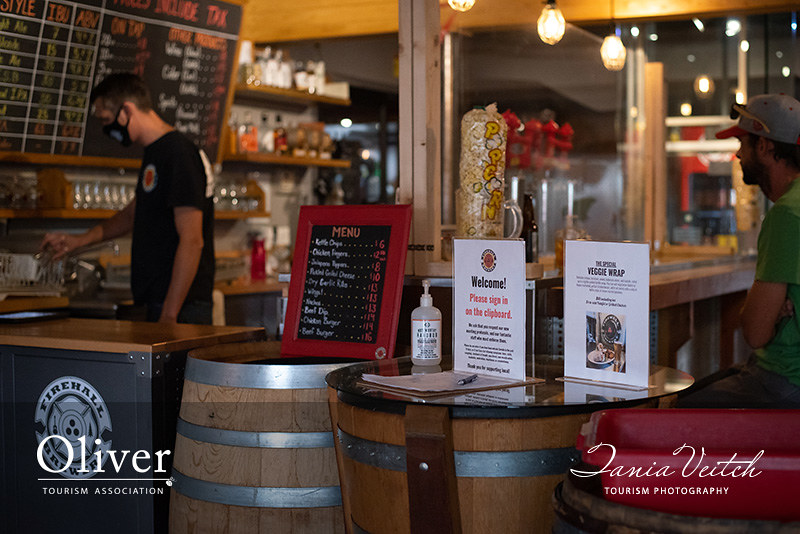 A friend and regular customer of the Firehall Brewery, who grows Merlot grapes for the Merlot-blonde ale (cask) came up with the idea of having a mini version of the event. It was later decided that it should be its own thing, a tribute instead.

“It’ll be fun! It’ll be chill and relaxed but that’s what we’re aiming for,” explained Sid Ruhland, owner/manager of Firehall Brewery.

Casks from events canceled in the spring, for example the oyster stout cask made with Derek at Oliver Eats for Oyster Fest, will now come out!

“There are many reasons why tasting events and COVID are not very compatible,” Sid explained, so he’s making it as COVID-friendly as possible.

People will arrive together and have a designated spot to enjoy the festivities.

Additionally, the staff wear masks, entrances and exits are one way, and sanitation stations are everywhere. 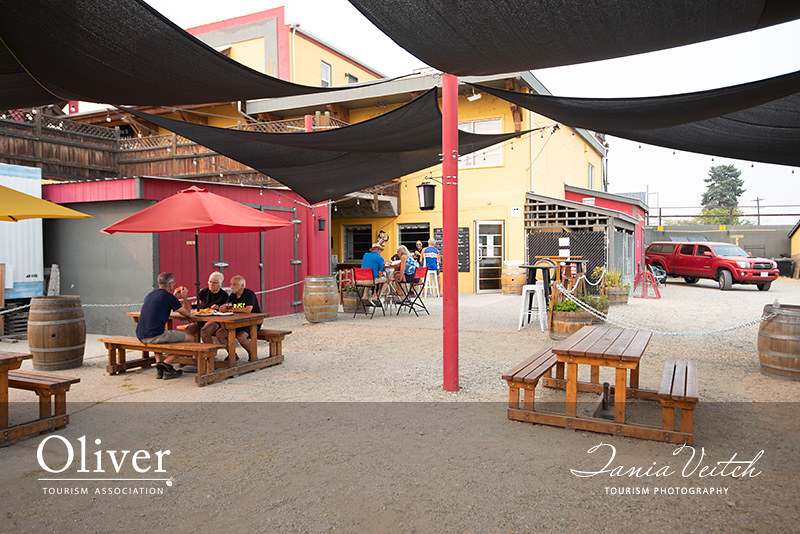 The Cask & Keg Tribute will be held outside 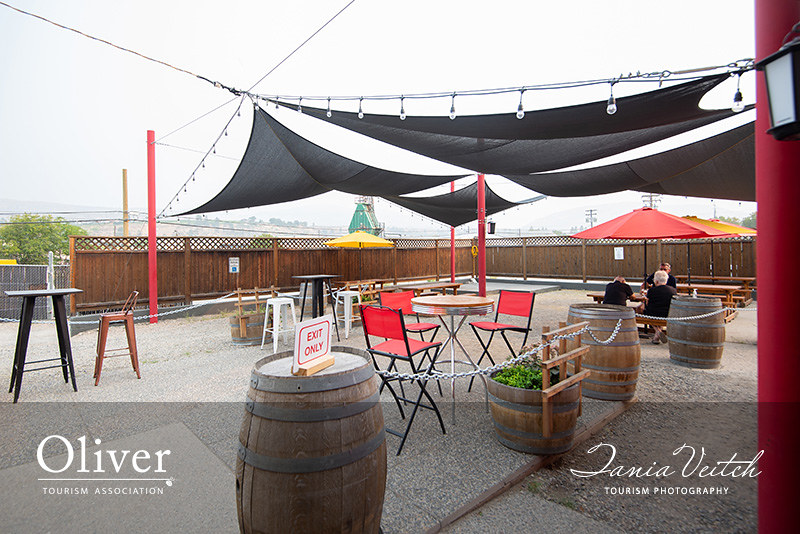 The Making of a Merlot-Blonde Cask

Preparation is well underway for a delicious ice-cold pint of Merlot-blonde ale. It takes approximately one month to make. 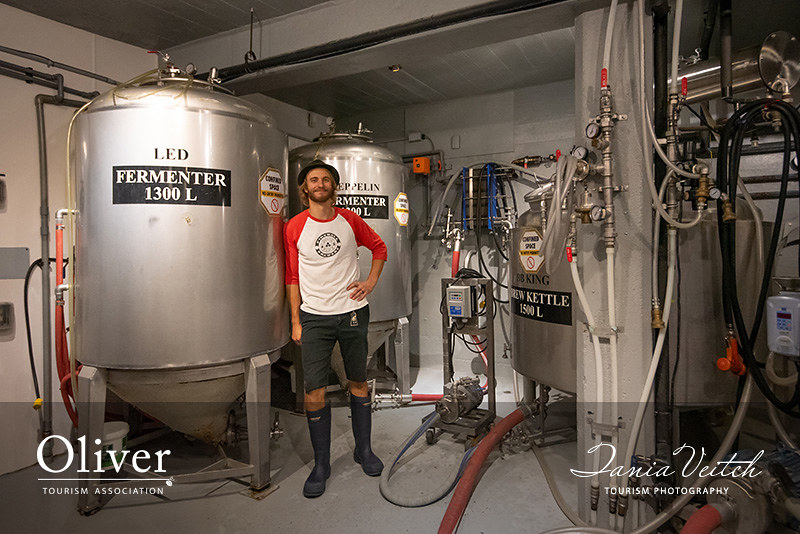 All the wine and beer is made at the brewery.

“If you can call it wine making,” Sid laughed. “It’s really just me squishing grapes in a bucket with a keg. It’s all done in a sanitized way and oxygen is flushed out with CO2,” he explained.

The cask is smaller than you may think. It takes a lot of grapes to fill a 20-litre cask like this one. Sid mentioned that over a two day period, he managed to squeeze out only 6 litres of juice! Much work goes into creating a cask of Merlot-blonde. 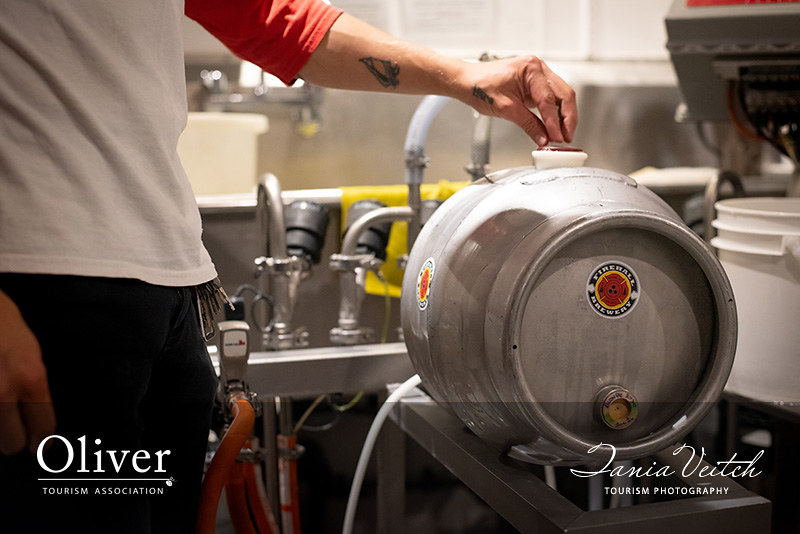 It’s clear that the Firehall Brewery has a lot of fun making casked beer.

Sid explained, “Before the beer is bunged up, you can do a bunch of exciting things with it inside the cask.”

He described how they take their Backdraft Blonde or Stoked Ember Ale and add it to the cask along with either peaches, Merlot, oak chips, more hops, or even oysters. And, yes, oyster stout is an actual beer style. It’s just not well known.

For this reason, these casks are event focused.

This would have been Firehall Brewery’s 4th year making the grape harvest-themed beer for the festival. It’s gone over very well so he’s done it every year until now.

This year, patrons will still have a chance to enjoy it, just in a much scaled-down way.

Cole Wilson with Mad Honey, who normally DJs at the Cask and Keg after-party held here at the Firehall Brewery, has agreed to DJ at the tribute event.

It will be low-key so everyone will stay seated, aside from lining up to try a bubbly pint or two from three unique casks including Merlot-blonde ale, oyster stout, or coffee stout.

Pints will be at a good price so guests can enjoy a taste of cask and grape beer.

How the Cask and Keg Started

The Cask and Keg began as a fall-themed Oliver-style October Fest with beer and live music. At it, you’d find a pumpkin cask and fall-decorated hay bales. For years, it was held two weeks after Festival of the Grape in the community bandshell.

Thoughts of combining the event with Festival of the Grape began bubbling up. The idea of having a separate event leading into the festival finally came to fruition after two years of attending meetings.

The first year, the event was called Night Fog for the night version of Festival of the Grape. The next year, when operations changed from the Chamber of Commerce to Oliver Tourism, the event was renamed the Cask and Keg. It has run strong until COVID hit.

Although most breweries, cideries, and distilleries come from the Okanagan, some come from other parts of the province to take part in Cask and Keg.

About the Firehall Brewery

Sid has been a part of the Firehall Brewery since 2011. His family purchased the building with a few other families in 2002. By 2003, the building was renovated with a restaurant on the main floor and conference rooms downstairs.

The restaurant was originally called The Toasted Oak Wine Bar and Grill. Sid began one of his first jobs there as a busboy when he was fourteen. He eventually went on to help manage the VQA wine store upstairs.

The restaurant was renamed The Firehall Bistro and run by a couple of different leaseholders over the years. Sid’s family eventually sold the building to the current owner of the bistro.

In 2011, the idea of the Firehall Brewery was born. The first batches of beer were ready for the beer lover’s palate in 2012. From then until 2016, the brewery made beer and wholesaled to the Firehall Bistro, local pubs, and then liquor stores once they started bottling.

The empty space beside the brewery was eventually converted into a beer shop and social area. After a tough first winter, a campaign was launched through Kickstarter to raise money for two keg fridges and a few other expensive pieces. 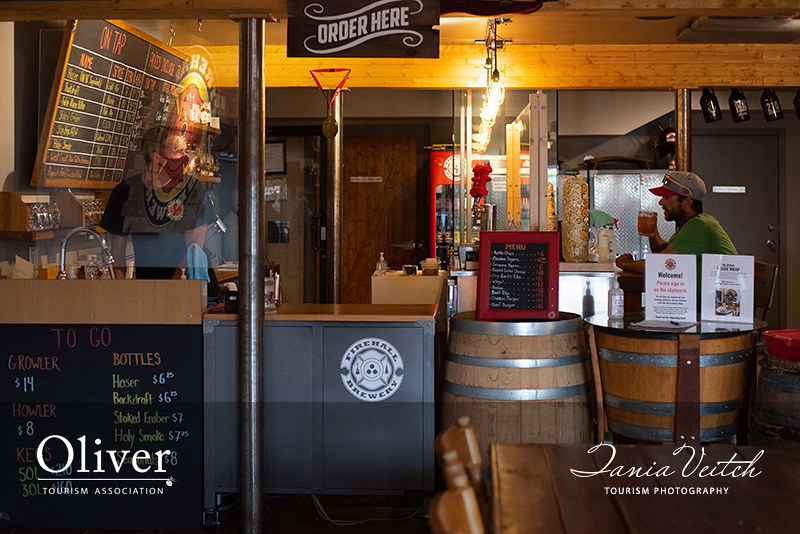 The beer shop and social area 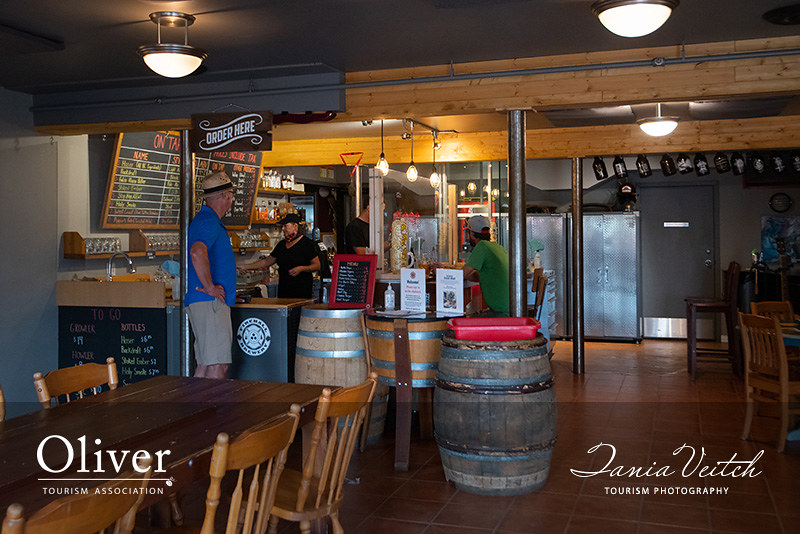 “This totally changed the nature of the business from brewing and selling to bringing people in and doing events,” Sid said.

The Hutton family moved to town and partnered with Sid. For three years, Danielle Hutton and her husband, Dermott, ran the beer shop and put on events that drew in clientele and helped propel the business to the next level. The shop and events are now run by Sid and his wife, Marie-Eve.

Sid feels pretty lucky, and happy to be open, thanks to the community support that helped him through Phase 1 of BC’s Restart Plan through the current Phase Three. Locals continued to purchase home-delivered beer during self-isolation and then returned for cold brews afterward. 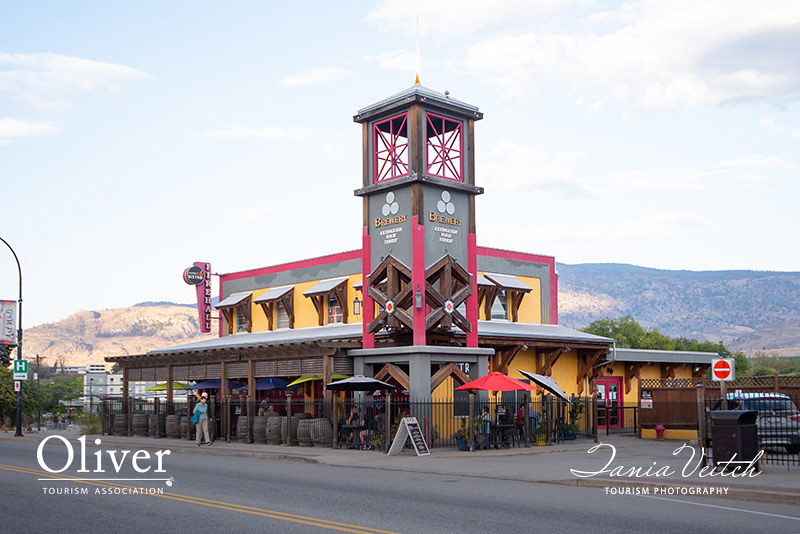 The Firehall Brewery is located downstairs

What’s up this fall?

In addition to the Cask and Keg Tribute this fall, the Firehall Brewery has plans to make the patio comfortable in colder temps, such as assembling a large tent and installing heaters. Planning for a propane fire pit with a ‘BYO chairs’ option is in the works too!

Trivia nights will continue until the end of October. There will also be some good drink specials!

For hungry patrons, tasty plates such as the Dry Garlic Ribs, Stoked Beef Dip, and the Beer Battered Chicken Burger are also served during opening hours between 3 pm and 8 pm, Wednesday through Sunday. Check out the menu! 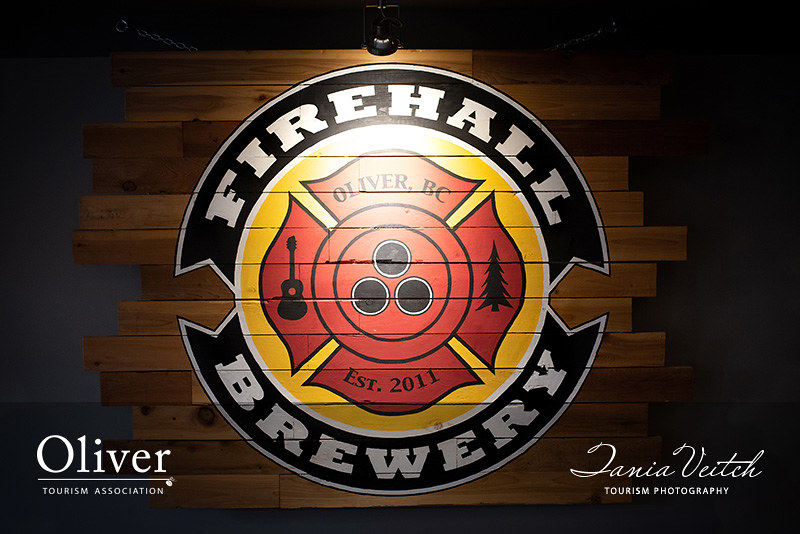 Great Horned Owls are an example of a bird species

Here's another fun way to spend time on Oliver's H

Sip Into Fall at Covert Farms